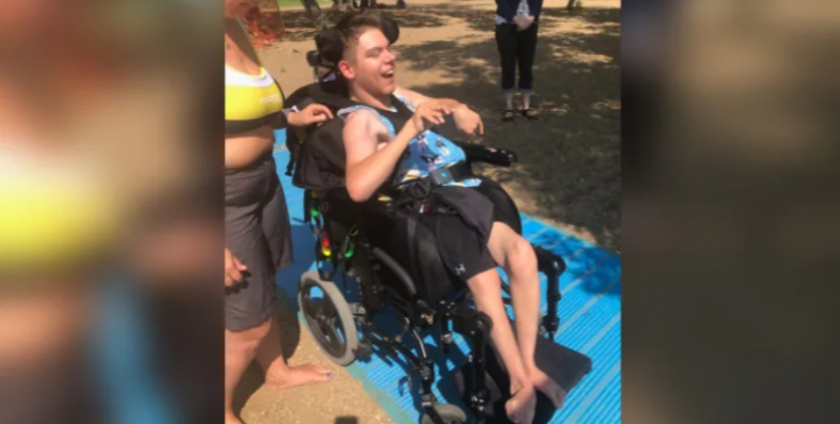 People who use wheelchairs can now take a dip in Last Mountain Lake at Regina Beach much more easily thanks to a group of residents who got together to raise money for equipment that makes the beach accessible.

The beach now has an access mat and “waterwheels,” a special buoyant wheelchair designed to be used in the water. The mat gives a stable surface for people in wheelchairs to use over the sand.

Five residents, including Janey Davies, raised the money to make it a reality. They started fundraising before the COVID-19 pandemic hit, then pivoted to online auctions, draws and a sports tournament.

“Never underestimate the power of a group of individuals that have passion,” Davies told guest host Peter Mills on CBC Saskatchewan’s The Morning Edition.

Davies was the guardian of her sister, who had an intellectual disability, for more than 40 years. Her sister died a few years ago.

“She used to love to come to the beach,” Davies said. “But in her late years, she was unable to walk in the sand. She was in a wheelchair. And, you know, it kind of broke my heart.”

Davies has also worked in schools with people with disabilities and wanted to bring them new opportunities and pleasures that other people may take for granted.

She said it was heartwarming to see people using the new equipment.

“Particularly one of my students that came out for the opening, and another young lady that was in an accident a number of years ago. And as a quadriplegic, she was out on the waterwheels as well,” Davies said. “It was very heartfelt.”

Davies and the committee held an opening last week for the equipment. Since then, they’ve had requests from other places wanting to install something similar.

“This is just the start of something bigger,” she said.

“I always thought that Saskatchewan was pretty good at accessibility. But I’ve learned a lot in the last little while that we need to do more.”