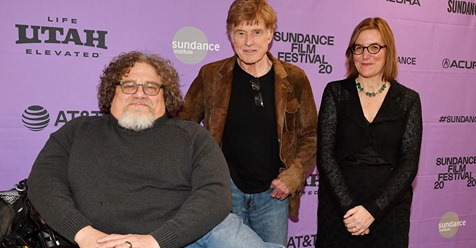 It’s the summer of 1971. A group of disabled hippie teenagers gather round at Camp Jened in the Catskills of upstate New York. Some teens are smoking outside. Some are playing music or baseball, and others are making out in the dining hall.

This is the setting for the first half of “Crip Camp,” a Netflix documentary spotlighting a summer camp that sparked a disability rights movement, eventually leading to the July 1990 passage of the historic Americans with Disabilities Act, which prohibits discrimination against people with disabilities. The film has big names attached — Barack and Michelle Obama share executive producing credits — and it received a standing ovation when it opened the Sundance Film Festival late last month.

“Crip Camp,” directed by Emmy-winning filmmaker Nicole Newnham and sound designer/mixer and former Jened camper Jim LeBrecht, relies on both archival footage and present-day interviews with former campers and counselors. The film, which hits Netflix in March, seamlessly presents a striking narrative of how a summer at Camp Jened transformed the way kids with disabilities viewed themselves and how they approached the world later.

In just under two hours, “Crip Camp” illustrates how being disabled is a political act despite society’s failure to recognize disability as a valid identity with its own community, history, culture and stake in all sociopolitical issues.

As the documentary reveals, campers at Jened have a variety of physical, intellectual, developmental and learning disabilities, including polio and cerebral palsy. The first half of the film largely centers LeBrecht’s experiences at Camp Jened as a teen with spina bifida and, later, as a disability rights activist. In the beginning, as campers spill out of the activity bus and arrive on the grounds of Jened, present-day LeBrecht reflects on what it felt like to be in the company of so many other disabled teenagers for the first time.

“There was that constant pressure of being found out” as the kid with a disability, says LeBrecht, who was 15 years old when he attended Camp Jened. “But at camp, everyone had something going on with their body. It just wasn’t a big deal.”

At Camp Jened, the teenagers embrace their newfound freedom — not from their disabilities, but to play guitar, jump in the swimming pool, make flower crowns, take walks, have sex, fall in love and be themselves — without having to conform to society’s expectations of how bodies should move and work.

At various points in the film, campers and disability activists refer to themselves as “cripples,” reclaiming what’s historically been used as a derogatory term by abled people to describe people with disabilities.

As the film unfolds, the campers bond over similar struggles with having a disability back home, such as the lack of privacy, overprotective parents, being ostracized and general fear of disability from the public — an undeniable contrast to Camp Jened, where accessibility, integration and mutual understanding are built into the experience from the beginning.

It also addresses the nuances of disability culture, including the varying experiences of people who acquire their disabilities later in life versus those who were born with them.

After getting a taste of being part of a truly inclusive community — one where it’s easy to get around and nobody gives you looks of pity — many campers find it difficult to move on with their regular lives.

“What we saw at that camp was that our lives could be better. The fact of the matter is that you don’t have anything to strive for if you don’t know that it exists,” LeBrecht says in the film. “I had to try to adapt. I had to fit into this world that wasn’t built for me. It never dawned on me that the world was ever gonna change.”

After Camp Jened, the teenagers grow up and eventually find each other again in Berkeley, California, during the mid-1970s. Much of the documentary’s second half is focused on Judy Heumann, a former counselor at Camp Jened and the founder of the political organization Disabled in Action.

“I don’t think I really felt ashamed about my disability. What I felt more was exclusion,” Heumann, who has polio and uses a wheelchair, says in the film. “For me, the camp experience really was empowering because we helped empower each other that the status quo is not what it needed to be.”

The documentary manages to spotlight several key events and news stories, including an exposé on the horrors of institutionalization and various demonstrations led by Disabled in Action, without feeling like a history lesson — a testament to LeBrecht’s and Newnham’s storytelling capabilities. By centering disabled people’s voices and firsthand experiences, “Crip Camp” provides a deeply personal look into what was at stake for more than 40 million people with disabilities in the United States at the time.

‘Crip Camp’ illustrates how being disabled is a political act despite society’s failure to recognize disability as a valid identity with its own community, history, culture and stake in all sociopolitical issues.

The film culminates with the 504 Sit-In, a 23-day nonviolent protest in which disability activists stormed the U.S. Department of Health, Education and Welfare and refused to leave until Section 504 — an anti-discrimination provision part of the Rehabilitation Act of 1972 — got signed. Schools, universities and hospitals pushed back against having to spend the money to make their buildings accessible.

Around the same time, the peace and civil rights movements were also well underway, providing a springboard for Heumann, LeBrecht and other Jened alumni to make their voices heard. Black Panthers, LGBTQ advocates and union members pooled what little resources they had to support the 504 protesters, showing that disability rights are part of a universal movement for equity and inclusion.

The resilience, resourcefulness and creativity that come with being disabled help the activists sustain their movement all the way up until the Americans with Disabilities Act is finally signed in July 1990, guaranteeing civil rights for the disability community across employment, education, transportation and other areas of public life.

“The passage of this monumental legislation will make it clear that our government will no longer allow the largest minority group in the United States to be denied equal opportunity,” Heumann says in the film during a hearing after the ADA is signed. “To do any less is immoral.”

For decades, disability rights has been considered a radical issue that’s struggled to be included in mainstream politics, often lagging behind in the progressive movement. But “Crip Camp” demonstrates what the teenagers of Camp Jened discovered during the summer of 1971: that having a disability is about as “normal” as you can get, and everyone else is simply catching up.